The Eyre Project is located approximately 600 km east of Perth, Western Australia, and 200 km south of the major mining centre of Kalgoorlie and covers an area of approximately 580 km2.

The Eyre project covers part of the north-east trending crustal-scale suture zone between the Archaean Yilgarn Craton to the north and the Proterozoic Albany Fraser Orogen to the south.   The project also covers a section of the crustal scale Jimberlana dyke which is known to be prospective for base metals and PGE. 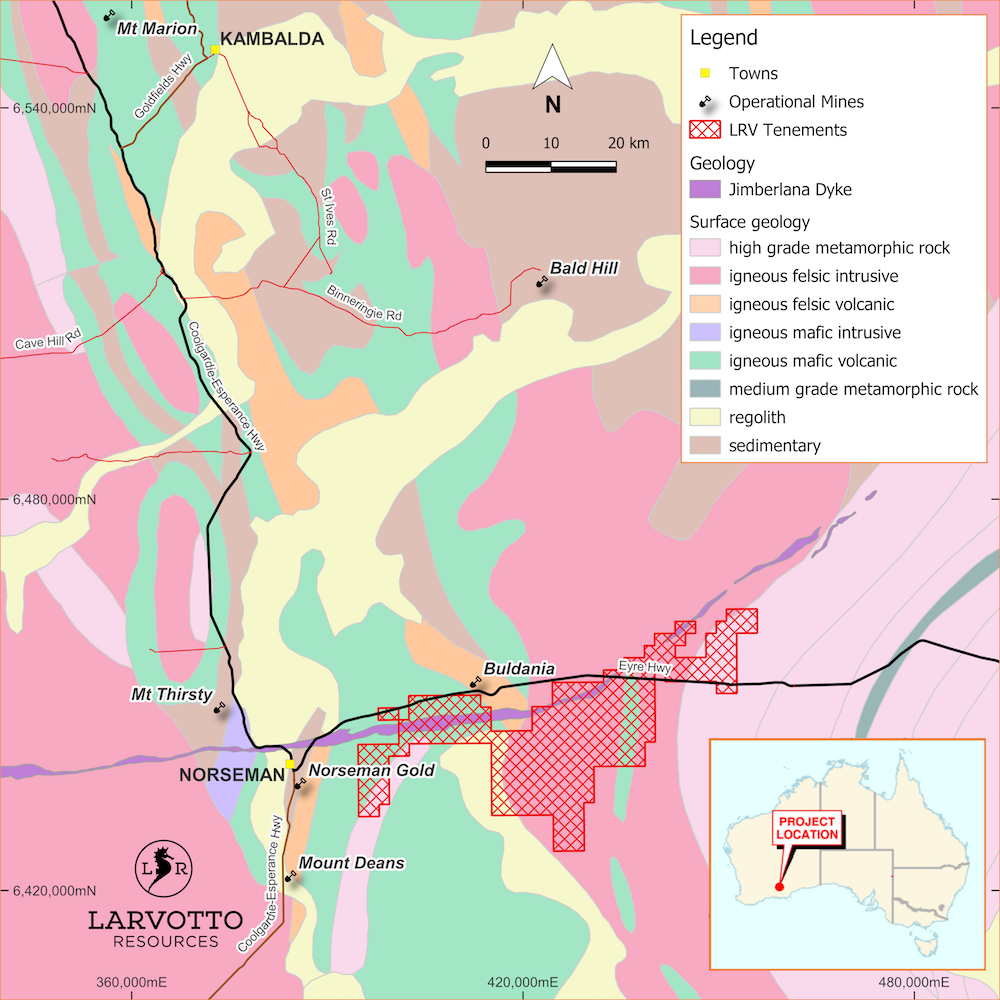 The Eyre Project represents an exciting early-stage exploration opportunity that has the potential for gold, copper, nickel, PGE and lithium discoveries within geological domains of known mineralisation potential.

Larvotto exploration at Eyre is initially targeting two areas prospective for lithium and base metals:

Geophysics and geological mapping of the units that host Liontown Resources’ (ASX:LTR) Buldania lithium deposit of 14.9Mt @ 0.97% Li2O and 44ppm Ta2O5 clearly indicates that the rock units extend into Larvotto ground south of the Buldania deposit. Wide spaced, historical sampling by Anglo Gold and test infill sampling by Larvotto identified that these units are associated with a lithium anomaly within Larvotto ground.

The Jimberlana Dyke is a large, late-stage, intrusive unit that cuts east-west through the regional geology and is known to be associated with base metal mineralisation at Mt Norcott and other areas. Western Mining Corporation drilled a single hole at Mt Norcott in the 1960s which intercepted anomalous base metal mineralisation of 0.68% Cu over two feet that has never been followed up. Newmont then undertook a wide spaced geochemistry survey in the 1970s around the drill hole that identified several broad spaced base metal (particularly copper) anomalies. These were also never followed up. 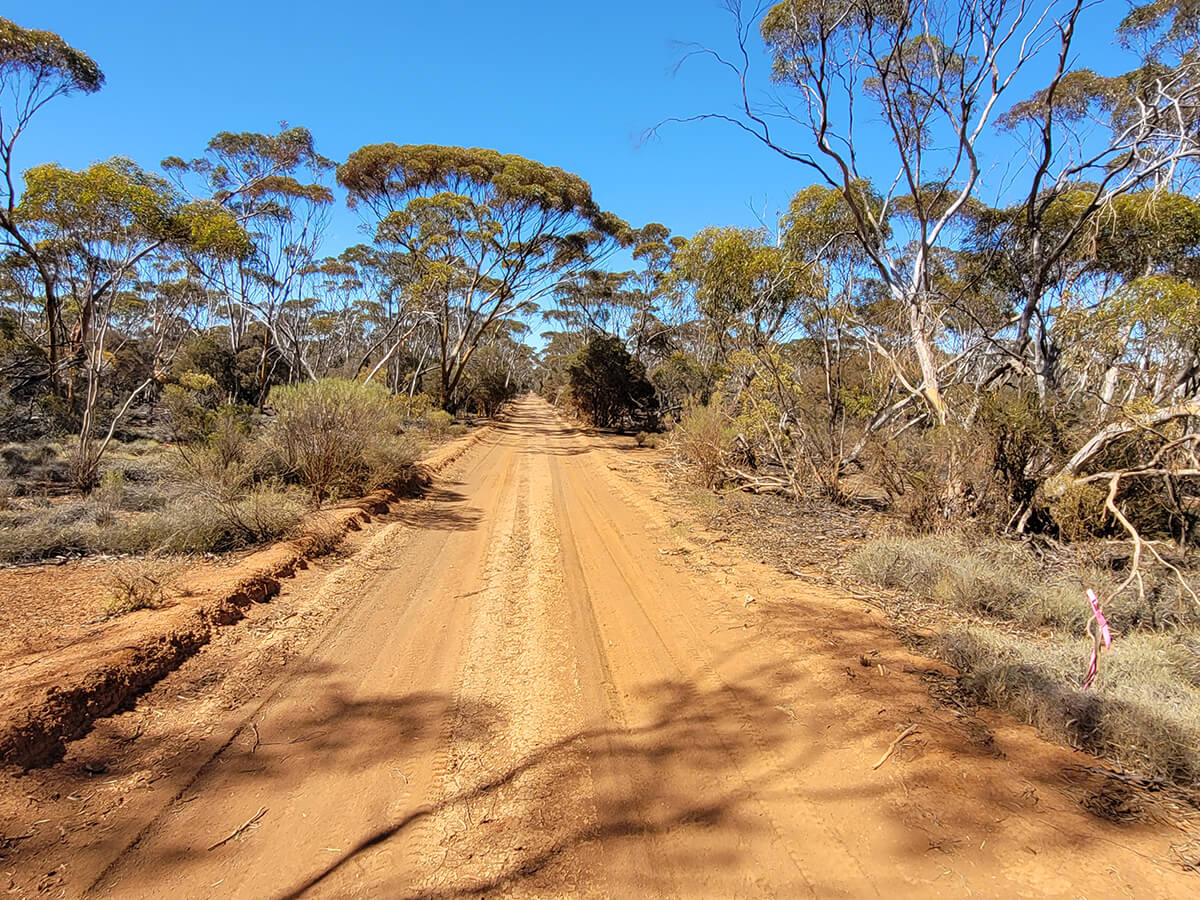 Typical landscape at the Eyre Project

The large polymetallic Eyre project has received relatively little past mineral exploration and no significant mineral occurrences have been identified to date. This is mainly because the area is covered by a thin veneer of soils that has hindered historical prospecting and surface soil geochemistry.

A number of significant gold projects occur adjacent to the project tenure, particularly the Daisy and Norseman gold deposit camps in the west and the Nova nickel deposit to the east.

The project is prospective for Archaean greenstone hosted gold similar to that identified at the Daisy East and Merivale prospects and mafic/ultramafic complex copper, nickel, and PGE mineralisation.

The project is also prospective for lithium being directly along strike from the Anna prospect of the growing Buldania Lithium project operated by Liontown Resources which currently contains 14.9Mt @ 0.97% Li2O and 44ppm Ta2O5. 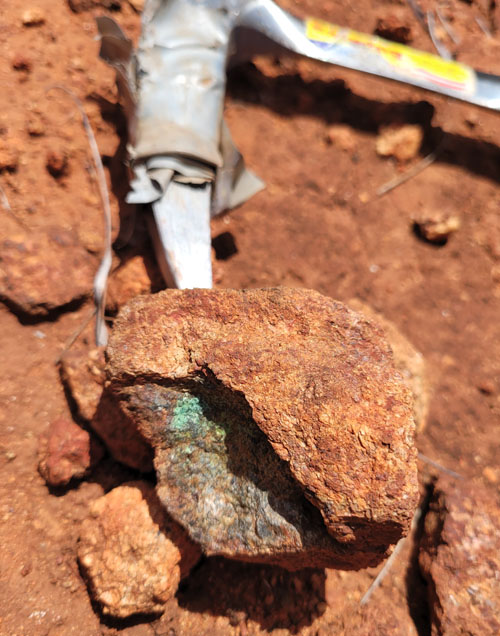 Archaean Greenstone Gold – The Archaean Yilgarn Craton has produced over 3,000 tonnes of gold, mainly from structurally-controlled deposits that formed during the latest stages of an orogenic event that affected the entire craton and culminated in the period 2.66–2.63 Ga. As a group, these late-orogenic deposits encompass a wide range of host rocks, structural settings and structural styles and alteration types.

Mafic/Ultramafic Complex Cu/Ni/PGE – The crustal scale Proterozoic Jimberlana Dyke extends east-northeast through the project area and is prospective for copper, nickel and PGE, with a number of copper occurrences being mapped within the Mt Norcott prospect.

The area has received only rudimentary exploration, with AGA completing the most comprehensive work, comprising a large-scale auger soil sampling program with subsequent assaying of a multi-element suite. Some minor prospecting excavations for gold are evident at the Daisy East Prospect and two lines of RAB/aircore drilling have been completed in the northern portion of the Merivale Prospect.

The Jimberlana Dyke is thought to be an analogue to the Great Dyke of Rhodesia and has potential for nickel/copper and PGE sulphide deposits.

Newmont Australia Ltd also explored the dyke directly to the east of Mt Norcott in the mid to late 1980’s.

The work by WMC confirmed the concentration of minor amounts of Ni/Cu/PGE sulphides in the top of the dyke.